"By 1983 I was thoroughly convinced that fluoridation caused more harm than good. I expressed the opinion that some of these children with dental fluorosis could, just possibly, have also suffered harm to their bones" 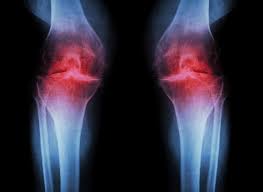 The high prevalence of osteoarthritis in Australia and other fluoridating communities

According to the Australian Institute of Health and Welfare, “Osteoarthritis is a chronic and progressive condition that mostly affects the hands, spine and joints such as hips, knees and ankles. It is the most common form of arthritis and the predominant condition leading to knee and hip replacement surgery in Australia.” More details available here.

In 2011, the US Centres for Disease Control (CDC) estimated that more than 27 million Americans have osteoarthritis (OA). In fact OA is the number one cause of disability in the US.

In July 2018, Arthritis Australia stated that:

Numerous studies have shown that skeletal fluorosis (a bone disease caused by too much fluoride) can cause symptoms and degenerative changes closely resembling osteoarthritis. While these arthritic effects were once considered to be confined to those with skeletal fluorosis, recent research shows that fluoride can cause osteoarthritis in the absence of traditionally defined fluorosis.

If conventional methods for detecting skeletal fluorosis continue to be used, many individuals with fluoride-induced osteoarthritis will not receive the correct diagnosis and treatment.

The symptoms of skeletal fluorosis (chronic joint pain and stiffness) mimic the symptoms of osteoarthritis. As an example of this, the following figure displays the findings from a recent Chinese study that investigated the prevalence of osteoarthritic symptoms in populations based on the level of fluoride in the drinking water: 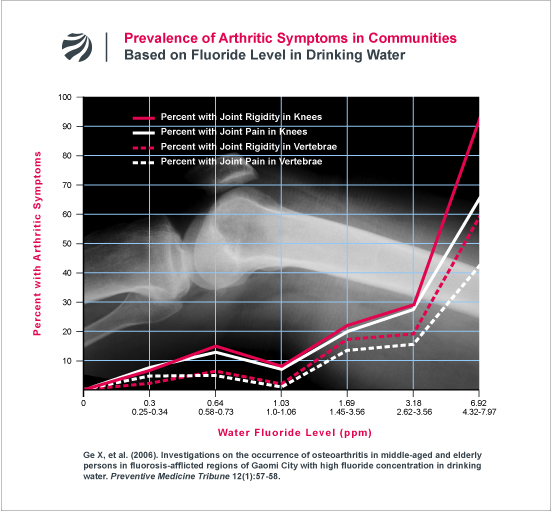 Fluoride can cause osteoarthritis

In 2003, a Chinese research group lead by Wensheng Bao et al, convincingly demonstrated in a well-conducted study. The researchers x-rayed the right hand of adults living in a fluorosis area. They then compared these x-rays with the findings of a nearby non-fluorosis area and the findings of a nationwide study that they had previously conducted. The incidence of osteoarthritis in the fluorosis area was “remarkably higher” than in either the adjacent area or the nation as a whole. According to the researchers, “the osteoarthritis caused by fluorosis differs from ordinary osteoarthritis in severity rather than in nature.”

Fluoride and osteoarthritis – before skeletal fluorosis is evident

For years, US and Australian health authorities have assumed that fluoride does not cause arthritic symptoms before the traditional bone changes of fluorosis are evident on x-ray. Several studies strongly suggests that this long-held assumption is in error.

Tartatovskaya (1995): This team of Russian researchers found that fluoride-exposed individuals suffer a significantly elevated rate of osteoarthritis in the absence of radiologically detectable fluorosis in the spine.

Czerwinski (1988): Consistent with the Turkish and Russian studies, a team of Polish researchers examined 2,258 fluoride-exposed workers in the aluminum industry and found high rates of arthritic effects in the absence of fluorosis bone changes. Although the researchers could only detect fluorosis by x-ray in 1% of the workers, they found high rates of joint pain in the knee, hip, elbow, shoulder and lumbar spine, with the pains correlating to the duration of fluoride exposure.

More details of these studies are available here.

As fluoride can cause OA in the joints prior to, and in the absence of, detectable osteosclerosis in the spine, skeletal fluorosis is difficult to diagnose. Many doctors are simply not trained to recognise fluoride-induced osteoarthritis (“secondary osteoarthritis”) and therefore many cases will be misdiagnosed as “primary osteoarthritis,” thus depriving patients of the most effective treatment for the condition (reduction in fluoride exposure).

In 1995, Roschger and his team of Austrian researchers highlighted the difficulty of differentiating between osteoarthritis and early stage skeletal fluorosis. In this study, the doctors conducted x-rays of a woman who received high-dose fluoride treatment for six years as an experimental treatment for osteoporosis. After the woman sustained multiple spontaneous fractures, the doctors x-rayed her skeleton and measured her bone density. The“radiographs of the skeleton and bone scintigraphy showed degenerative osteoarthritis,” but none of the traditional signs of skeletal fluorosis. It wasn’t until the doctors performed a bone biopsy that the doctors were able to detect the presence of fluorosis. As the doctors noted, “Without bone biopsy we would have failed the correct diagnosis.” Based on this experience, the doctors concluded that “invasive investigation of the skeleton (bone biopsy, histomorphometry, BSEI plus SAXS) is the only diagnostic tool, when skeletal fluorosis is suspected.”