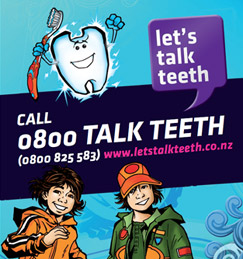 New Zealanders now have good dental health by world wide standards. However that wasn’t always the case. In the 1950s New Zealand had one of the worst rates of dental decay in the western world.  People as young as 21 routinely had to have their teeth extracted and just about all New Zealanders over the age of 40 remember the dreaded visits to the dental clinics. These were known as the “Murder House” where, as children, we were subjected to many fillings without any anaesthetic.

Today things are very different for the vast majority of children in New Zealand. Around 50 per cent of children have no dental decay at all and the average amount of decay (for the children that do have some decay) is around one or two fillings each.  A very small minority have worse decay and even have to have teeth extracted. This is often caused by children given sweet drinks in a baby bottle.

Something to Smile About: Free dental care until the age of 18

A range of basic preventive, treatment and specialist dental services are available to eligible children and adolescents up until 18 years of age. A limited range of services for some adults is publicly funded.

Something to Smile About is a short film about free dental care for kids and teens from the Wellington Regional Dental Service.

The Ministry of Health claim fluoridation reduces dental decay by 40% but this figure is taken from a much smaller sample size which was used the 2009 oral health survey. 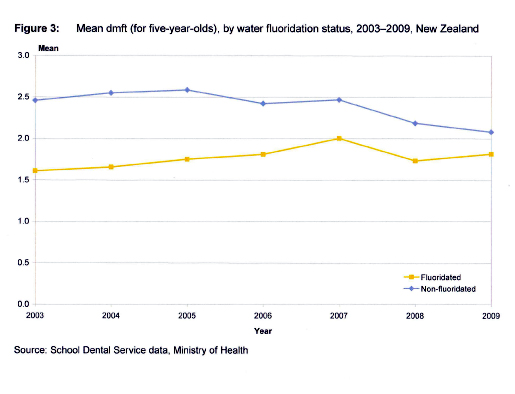 No one knows exactly why dental health has improved over the years as there are many possible reasons.  Better diet, refrigeration allowing for consumption of more fruit and vegetables, increased consumption of cheese, use of antibiotics or more tooth brushing all could of had an effect.  Definitely a change in the diagnostic criteria by dental nurses in the 1970s led to a marked reduction in decay rates. Scientist Mark Diesendorf wrote an article called the Mystery of Declining Tooth Decay in 1986 which was published in the Journal Nature.

We do know, however, that reduction in dental decay was occurring in New Zealand before the introduction of fluoridation and that decay rates improved throughout New Zealand even though only around 50% of New Zealand is fluoridated.

Christchurch is one of New Zealand’s largest cities, and is the largest non-fluoridated cities. Christchurch children routinely have less dental decay than fluoridated Auckland and fluoridated Hamilton. 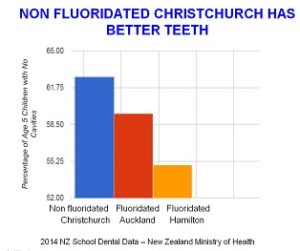 New Zealand now has about the same level of dental decay as most of the western world which is mostly not fluoridated.