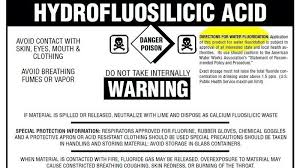 A common and grave misconception is that fluoride chemicals used in water fluoridation are pharmaceutical grade, especially produced and suitable for addition to our water supplies.

The reality is that most Australian drinking water is fluoridated using:

3. sodium fluoride (only used by smaller fluoridation plants, and produced by neutralizing (or reducing the acidity of) the raw hexafluorosilicic acid with soda ash).

The manufacture of fertiliser produces many pollutants, and to make phosphate fertiliser manufacturers environmentally friendly, governments ensure that ‘pollution scrubbers’ (fine water jets spraying in the chimneys of the fertiliser plants that ‘catch the vapours’) are used to prevent pollution. The toxic gasses that would otherwise be released into the atmosphere are hydrogen fluoride (HF) and silicon tetrafluoride (SiF⁴). These gasses rise and come into contact with the water particles where it dissolves into a liquid form. This liquid is hexafluorosilicic acid – often contaminated with traces of lead, mercury, cadmium, chromium, arsenic and sometimes even uranium – and is barrelled up and sold, unrefined.

In the past, before “scrubbers” were enforced by law, these gasses escaped and caused vegetation to be scorched, crops to be destroyed, and cattle to be crippled. Should manufacturers directly release the fumes and vapour into the air – court cases are likely to ensue to due the health and environmental damage occurring as a direct result.
Sodium fluoride, used in toothpaste and in some remote regions in Australia and New Zeeland to fluoridate the water supply, is a schedule 6 poison.

In the United States, silico fluoride is scheduled as a class 6 poison, and hexafluorosilicic acid is a class 7 poison. Yet, when diluted and added to drinking water – it becomes ‘an effective medical treatment’ and “one of the top 10 health initiatives”. Also note, in the USA – previously it was “an established and settled science fact that 1mg/L is a safe dose” yet in 2015 – they admitted that it was too high, and subsequently lowered the dose to 0.7mg/L).

Here in Australia the range of  fluoride added to water is 0.7 – 1.1mg/L. This range is dependant on “thirst levels due to climate” (not due to any other reason such as health or physical activities).

It is difficult to escape consuming fluoride even when living in an un-flouridated area. By consuming cereal, soda, juice, beer and any other processed food and drink manufactured with fluoridated water – you are still ingesting fluoride.