“The health risks from fluoridation to the brain, bones, thyroid, and kidneys far outweigh any benefits to teeth. It is unethical to force exposure to fluoridation chemicals on entire populations without consent.”

Fluoride is a nephrotoxin (damages the kidneys)

The kidneys help prevent the build-up of toxic fluoride levels in the body by excreting fluoride through the urine. When kidney function declines (due to age or disease), the risk of fluoride toxicity increases.

Because the kidney is exposed to higher concentrations of fluoride than all other soft tissues (with the exception of the pineal gland), there is concern that excess fluoride exposure may contribute to kidney disease – thus initiating a “vicious cycle” where the damaged kidneys increase the accumulation of fluoride, causing in turn further damage to the kidney, bone, and other organs. This possibility is supported by a long line of animal research, as well as two types of human studies: (1) studies of kidney function in individuals with skeletal fluorosis and/or elevated fluoride exposure, and (2) studies on the effects of high temporary peaks in fluoride exposure following anesthesia with fluorinated chemicals.

Individuals with advanced kidney disease are known to have a very high susceptibility to fluoride toxicity since their bones and other tissues accumulate fluoride at levels far higher than healthy individuals. This fluoride build-up places kidney patients at a sharply elevated risk for skeletal fluorosis, a painful bone disease caused by excessive fluoride intake. Fluoride intake can also contribute to and exacerbate the complex bone disease renal osteodsystrophy, as well as the tooth staining and disfigurations that many people with advanced kidney disease suffer. These risks exist at current levels of exposure in communities with fluoridated drinking water.

For more details on fluoride’s effect on the kidneys and the link to diabetes, read our article: Fluoride and diabetes. 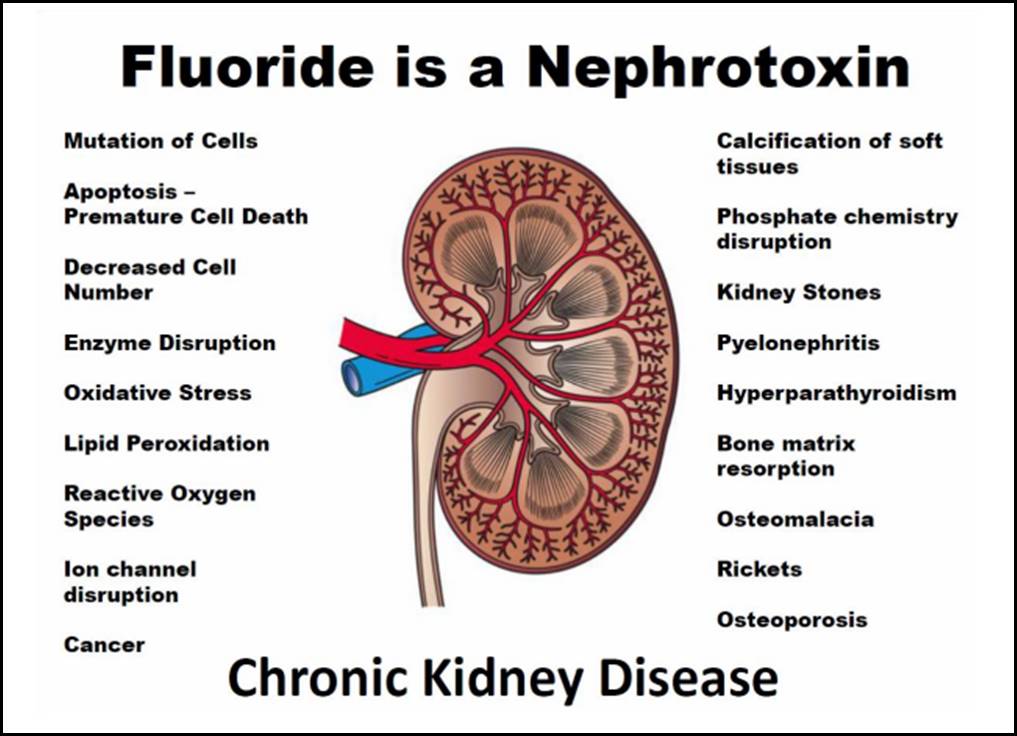 On 15 April 2008, around two years after the US NRC’s detailed review on water fluoridation was published in 2006, the US National Kidney Foundation (NKF) issued a new position paper formally cancelling its previous position paper on water fluoridation, concluding that individuals with chronic kidney disease should be notified of the potential risk from exposure to fluorides.

The paper acknowledged gaping holes in research concerning kidney impacts from fluorides. The NKF officially withdrew its support for water fluoridation and the American Dental Association removed it from its list of supporting organisations.

This change in position follows a lawyer’s letter sent to the NKF by US attorney Robert Reeves on 18 September 2007, at the instigation of the Lillie Center Inc, a private health training company. The letter contained the following opening sentence.

“This letter is to make you aware of a window of opportunity for the National Kidney Foundation (NKF) to act on behalf of its constituents in accordance with the organization’s stated mission. Your actions or inaction in response to this letter have the potential to help or harm many patients with kidney disease, and you should be aware that NKF’s response to this benchmark notification may determine whether NKF and responsible individuals, which might include past and present Officers, Board Members and/or employees are named as defendants in anticipated legal actions now in development.” 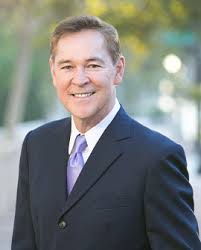 Reeves’ letter cites the authoritative report from the National Research Council issued in 2006 that concluded that, “Early water fluoridation studies did not carefully assess changes in renal function.” The NRC report also identifies kidney patients as a “susceptible subpopulation” that is particularly vulnerable to harm from fluorides.

“The letter to the National Kidney Foundation is only the tip of the iceberg,” says Daniel Stockin of the Lillie Center. “The kidney and diabetes lawsuits are about to begin. Employers, water agencies, food and beverage sellers and manufacturers, you name it – I would suggest they immediately halt use or sale of fluoridated water or products containing it.”

The NKF has issued no press release about the April statement and has offered no direct link to the new information on its web site except when a search for the term “fluoride” is entered.

It should be noted that the NKF is funded by the US Government agency, the Centers for Disease Control and Prevention (CDC), one of the two leading promoters of fluoridation in the US, which perhaps explains its reticence in issuing appropriate warnings. The CDC itself is potentially facing ethics charges over its failure to appropriately notify the public of the NRC’s findings, especially those subpopulations identified by the NRC as being at particular risk from fluoride.

Several excerpts from studies on the nephrotoxic effects of fluoride:

“Evidence of chronic fluoride intoxication, associated with renal tubular dysfunction in the group of FMBD patients, brings to focus the possibility that fluoride toxicity may be responsible for both bone and kidney disease in FMBD… Evidence is available in the literature to support our observation of fluoride-induced renal damage.”
SOURCE: Harinarayan CV, et al. (2006). Fluorotoxic metabolic bone disease: an osteo-renal syndrome caused by excess fluoride ingestion in the tropics. Bone 39: 907-14.

“Renal function especially glomerular filtration rate was very sensitive to fluoride exposure. Inorganic phosphate concentrations in urine were significantly lower in the residents in fluorosis areas in China than in non-fluorosis area in China and Japan…. The results show that exposure to excess fluoride has caused dental/skeletal fluorosis and reduced glomerular filtration rate in the residents living in fluorosis areas..”
SOURCE: Ando M, et al. (2001). Health effects of fluoride pollution caused by coal burning. Science of the Total Environment 271(1-3):107-16.

“Kidney damage (1) in distal and proximal tubular function, (2) in glomerular filtration, occurred in 40 to 60 year olds residing in El Quel an endemic fluorosis area in Southern Algeria compared to normals from Algiers. Functional renal disturbances are proportional to the degree of fluoride accumulation which incrases in relation to: a) the level of fluoride in drinking water, b) the fluoride level in nails and c) the radiological grade (O I II III) of fluorosis.”
SOURCE: Reggabi M, et al. (1984). Renal function in residents of an endemic fluorosis area in southern Algeria. Fluoride 17: 35-41.

“The kidney function of 25 radiologically proven cases of endemic fluorosis was studied at the Medical College of Patiala. Evidence of statistically significant decrease in creatinine clearance is presented. Some structural abnormalities in kidneys have been described. No significant tubular abnormalities could be demonstrated by water loading and water deprivation tests.”
SOURCE: Singla VP, et al. (1976). The kidneys. Fluoride 9: 33-35.

“The question is whether the chronic excessive fluoride intake caused the renal damage (either directly or indirectly) or whether the systemic fluorosis was due to impaired renal function.”
SOURCE: Juncos LI, Donadio JV Jr. (1972). Renal failure and fluorosis. Journal of the American Medical Association 222(7):783-5.

“Of the 19 patients in the series, 12 were examined for the presence of albuminuria, and this was found to be present in 11. The urinary excretion of fluorine damages the kidney, which results in the common finding of albuminuria… Renal damage does appear to be a frequent occurrence and is probably due to the excretion of fluorine, analagous to renal damage caused by heavy metals.”
SOURCE: Kumar SP, Harper RA. (1963). Fluorosis in Aden. British Journal of Radiology 36: 497-502.

“Kidney damage can appear within a few days following methoxyflurane anesthesia. This phenomenon was studied by Cousins and Mazze (1973), who reported that peak (i.e. transient) post-anesthesia plasma F- levels in afflicted humans exceeded 90 umol/l. The nephrotoxicity was accompanied by an increased urine volume of low osmolarity, and increased thirst, with the syndrome tending to obey a short-term dose-response pattern in man. Mazze et al. (1972) and Cousins et al. (1974) have shown that kidney damage in rats exposed to methoxyflurane was caused by high inorganic fluoride concentrations and not by oxalic acid, which is also a metabolic breakdown product of methoxyflurane. Taves et al. (1972) also related the nephrotoxicity and polyuria to the metabolically released inorganic fluoride.”
SOURCE: Marier J, Rose D. (1977). Environmental Fluoride. National Research Council of Canada. Associate Committe on Scientific Criteria for Environmental Quality. NRCC No. 16081.