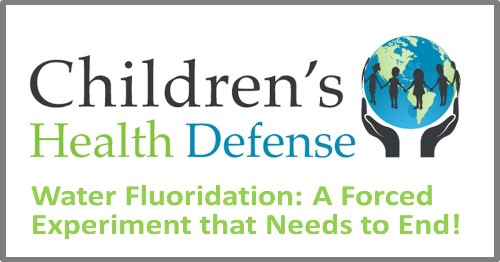 Fluoridation: a forced experiment that needs to end

Excerpts from an article by Children’s Health Defense

The United States stands almost entirely alone among developed nations in adding industrial silicofluorides to its drinking water—imposing the community-wide measure without informed consent. Globally, roughly 5% of the population consumes chemically fluoridated water, but more people in the U.S. drink fluoride-adulterated water than in all other countries combined. Within the U.S., just under a third (30%) of local water supplies are not fluoridated; these municipalities have either held the practice at bay since fluoridation’s inception or have won hard-fought battles to halt water fluoridation.

"Dozens of studies and reviews—including in top-tier journals such as The Lancet—have shown that fluoride is neurotoxic and lowers children’s IQ."

The fluoride chemicals added to drinking water are unprocessed toxic waste products—captured pollutants from Florida’s phosphate fertilizer industry or unregulated chemical imports from China. The chemicals undergo no purification before being dumped into drinking water and often harbor significant levels of arsenic and other heavy metal contamination; one researcher describes this unavoidable contamination as a “regulatory blind spot that jeopardizes any safe use of fluoride additives.”

Dozens of studies and reviews—including in top-tier journals such as The Lancet—have shown that fluoride is neurotoxic and lowers children’s IQ. Fluoride is also associated with a variety of other health risks in both children and adults. However, U.S. officialdom persists in making hollow claims that water fluoridation is safe and beneficial, choosing to ignore even its own research! A multimillion-dollar longitudinal study published in Environmental Health Perspectivesin September, 2017, for example, was largely funded by the National Institutes of Health and National Institute of Environmental Health Sciences—and the seminal study revealed a strong relationship between fluoride exposure in pregnant women and lowered cognitive function in offspring. Considered in the context of other research, the study’s implications are, according to the nonprofit Fluoride Action Network, “enormous”—“a cannon shot across the bow of the 80 year old practice of artificial fluoridation.”

The authors of The Case Against Fluoride persuasively argue that “bad science” and “powerful politics” are primary factors explaining why government agencies continue to defend the indefensible practice of water fluoridation, despite abundant evidence that it is unsafe both developmentally and after “a lifetime of exposure to uncontrolled doses.” Comparable to Robert F. Kennedy, Jr.’s book, Thimerosal: Let the Science Speak, which summarizes studies that the Centers for Disease Control and Prevention (CDC) and “credulous journalists swear don’t exist,” The Case Against Fluoride is an extensively referenced tour de force, pulling together hundreds of studies showing evidence of fluoride-related harm.

The research assembled by the book’s authors includes studies on fluoride biochemistry; cancer; fluoride’s effects on the brain, endocrine system and bones; and dental fluorosis. With regard to the latter, public health agencies like to define dental fluorosis as a purely cosmetic issue involving “changes in the appearance of tooth enamel,” but the International Academy of Oral Medicine & Toxicology (IAOMT)—a global network of dentists, health professionals and scientists dedicated to science-based biological dentistry—describes the damaged enamel and mottled and brittle teeth that characterize dental fluorosis as “the first visible sign of fluoride toxicity.”

The important 2017 study that showed decrements in IQ following fluoride exposure during pregnancy is far from the only research sounding the alarm about fluoride’s adverse developmental effects. In his 2017 volume, Pregnancy and Fluoride Do Not Mix, John D. MacArthur pulls together hundreds of studies linking fluoride to premature birth and impaired neurological development (93 studies), preelampsia (77 studies) and autism (110 studies). The book points out that rates of premature birth are “unusually high” in the United States. At the other end of the lifespan, MacArthur observes that death rates in the ten most fluoridated U.S. states are 5% to 26% higher than in the ten least fluoridated states, with triple the rate of Alzheimer’s disease. A 2006 report by the National Research Council warned that exposure to fluoride might increase the risk of developing Alzheimer’s.

The word is out

Pregnancy and Fluoride Do Not Mix shows that the Institute of Medicine, National Research Council, Harvard’s National Scientific Council on the Developing Child, Environmental Protection Agency (EPA) and National Toxicology Program all are well aware of the substantial evidence of fluoride’s developmental neurotoxicity, yet no action has been taken to warn pregnant women. Instead, scientists with integrity, legal professionals and the public increasingly are taking matters into their own hands. A Citizens Petition submitted in 2016 to the EPA under the Toxic Substances Control Act requested that the EPA “exercise its authority to prohibit the purposeful addition of fluoridation chemicals to U.S. water supplies.” This request—the focus of a lawsuit to be argued in court later in 2019—poses a landmark challenge to the dangerous practice of water fluoridation and has the potential to end one of the most significant chemical assaults on our children’s developing bodies and brains.

Fluoridation advocates have acknowledged that fluoride’s predominant effects for growing decay-resistant, harder teeth come from topical use (i.e., applying it directly onto teeth) as opposed to systemic exposure (i.e., drinking or ingesting fluoride through water or other means). However, research also has indicated that fluoride does not aid in preventing pit and fissure decay (the most prevalent form of tooth decay in the U.S.) or in preventing baby bottle tooth decay (prevalent in less affluent communities). In malnourished children and individuals of lower socioeconomic status, fluoride may actually increase the risk of dental caries due to calcium depletion and other circumstances. Given this body of research—and Harvard experts’ warning that fluoride is one of 12 industrial chemicals known to cause developmental neurotoxicity in human beings—why do public health officials persist in claiming that water fluoridation is either necessary or safe?

"[Researchers] found that the reasonable maximum exposure estimates exceeded the upper tolerable intake and concluded that some children may be at risk for fluorosis."

Exposure to excess fluoride in children is known to result in dental fluorosis, a condition in which the tooth enamel becomes irreversibly damaged and the teeth become permanently discolored, displaying a white or brown mottling pattern and forming brittle teeth that break and stain easily. Dental researchers have identified dental fluorosis as a first sign of fluoride toxicity.

According to data from the Centers for Disease Control and Prevention (CDC) released in 2010, 41% of children aged 12-15 exhibit fluorosis to some degree, up from 23% of 12-15-year-olds in 1986 (see figure below). These increases in rates of dental fluorosis were a factor in the U.S. Public Health Service’s 2015 decision to dramatically lower its water fluoridation level recommendations, from a high of 1.2 milligrams per liter (mg/L) down to 0.7 mg/L. 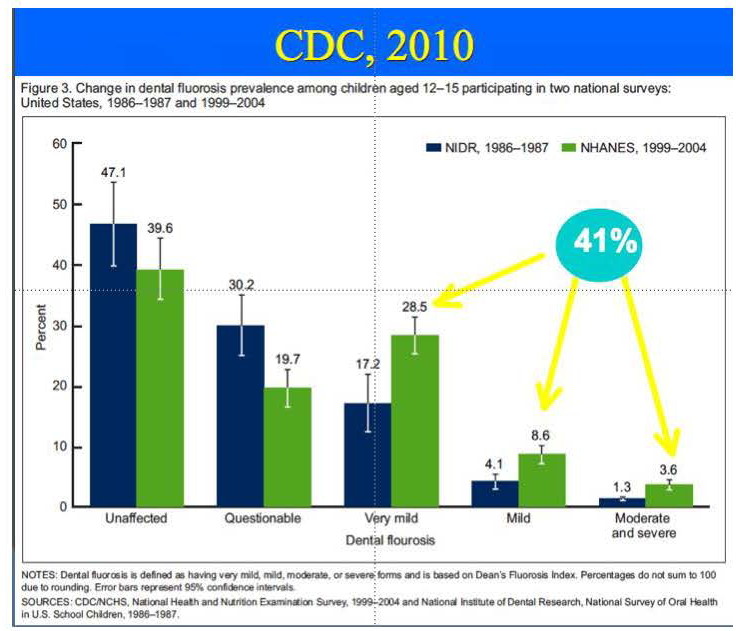 The downward revision of the Public Health Service’s recommendations for fluoride concentrations in drinking water fails to account for the fact that children are exposed to many different sources of fluoride on a daily basis. Exposure to these diverse sources has drastically increased since community water fluoridation began in the U.S. in the 1940s. In addition to water and other beverages, fluoride exposure occurs through food, air, soil, dental products used at home and in the dental office, and through an array of other sources.

Several studies conducted in the United States have offered data about children’s exposure to multiple sources of fluoride, as well as warnings about the situation. Markedly, a study published in 2015 by researchers at the University of Iowa considered exposure from water, toothpaste, fluoride “supplements” and foods. The researchers found that there was considerable individual variation in exposure levels and offered data showing that some children exceed the alleged “optimal” range. Highlighting the problematic nature of issuing recommendations about fluoride intake, the authors concluded:

[I]t’s doubtful that parents or clinicians could adequately track children’s fluoride intake and compare it [to] the recommended level, rendering the concept of an “optimal” or target intake relatively moot.

A similar 2005 study by researchers at the University of Illinois at Chicago evaluated children’s fluoride exposure from drinking water, beverages, cow’s milk, foods, fluoride “supplements,” toothpaste swallowing and soil ingestion. They found that the reasonable maximum exposure estimates exceeded the upper tolerable intake and concluded that “some children may be at risk for fluorosis.”

"… research completed by Dr. Elise Bassin while at Harvard School of Dental Medicine showed that exposure to fluoride at ‘recommended’ levels correlated with a seven-fold increase in osteosarcoma in boys who had been exposed between the ages of five and seven."

In 2006, the National Research Council (NRC) issued a report discussing the potential link between fluoride exposure and osteosarcoma. This type of bone cancer is one of the most common groups of malignant tumors in children and adolescents. The NRC stated that while the evidence was as of yet tentative, fluoride appeared to have the potential to promote bone cancers; the authors also cited biological plausibility due to “fluoride’s deposition into bone and its mitogenic effects on bone cells.” A mitogen is a chemical substance that triggers cell division (mitosis)—and cancer represents mitosis that has run amok.

While some epidemiological studies have failed to find an association between fluoride and osteosarcoma, research completed by Dr. Elise Bassin while at Harvard School of Dental Medicine showed that exposure to fluoride at “recommended” levels correlated with a seven-fold increase in osteosarcoma in boys who had been exposed between the ages of five and seven. Bassin’s research, published in 2006, is the only study about osteosarcoma that has taken age- and sex-specific risks into account.

A large number of studies associate fluoride with loss of IQ. For example, a landmark study published in 2017 (funded by the National Institutes of Health) found that prenatal fluoride exposure was strongly associated with lower scores on tests of cognitive function in the offspring. Interestingly, silicofluoride—the fluoride compound used in the vast majority of water fluoridation schemes—has been associated with higher blood lead levels in children, and lead is known to lower IQ. Lead has also been linked to violent behavior, and research likewise supports the potential association of silicofluoride with violence.

Meanwhile, discussion has ensued as a result of several research studies published in 2018 that linked fluoride to underactive thyroid, attention-deficit/hyperactivity disorder (ADHD) and other adverse impacts on health and behavior.

While adding a developmental neurotoxin to the water supply endangers everyone in the community, infants and children are obviously at highest risk for harmful effects. In addition to the potential adverse outcomes for this susceptible population discussed above (cancer, IQ loss and thyroid dysfunction), water fluoridation poses other health risks such as arthritis, bone fractures and learning disorders. We need to protect our children—and protect our water—by learning the facts and demanding policies that reduce and eliminate avoidable sources of fluoride, including artificial water fluoridation.