This email was sent to around 600 State Members of Parliament.

Re: WATER FLUORIDATION – an urgent matter impacting the health of NSW residents

As a Member of the NSW State Parliament, you are ultimately responsible for the addition of fluoridation chemicals to your state’s public drinking water supplies, according to state legislation.

You have a Duty of Care to be informed of the science showing that fluoride is not safe or effective. We would therefore like to help you become aware of recent neurotoxicity science, a stream of other science showing the damage fluoride can cause to our health and the consistently misleading and deceptive tactics used by our health agencies to defend and promote fluoride.

Please be aware of the following issues and refer to linked articles for more details:

1) Recurring neurological studies that you cannot keep ignoring
On 19 August 2019, another ‘Mother-Offspring’ fluoride-IQ study confirmed the neurological damage caused by fluoride to the developing brain. This particular study, conducted by a team of Canadian and American researchers, links increased fluoride exposure during pregnancy to lowered IQ in their offspring. Researchers concluded: “There was no safe level” of fluoride exposure during pregnancy. More here. Australian media were quick to dismiss this study, stating “it’s only one study and more studies are needed”, without realising this study is in fact the latest in 20 years of research – including 54 human (child) fluoride-IQ studies. More here.

This latest study was published in the prestigious JAMA Paediatrics journal. In his editorial, Harvard Professor Dr. David Bellinger gave the following warnings:

“The hypothesis that fluoride is a neurodevelopmental toxicant must now be given serious consideration… Exposure to fluoride has increased substantially in recent decades…If the effect sizes reported by Green et al and others are valid, the total cognitive loss at the population level that might be associated with children’s prenatal exposure to fluoride could be substantial.”

3) A steady stream of other extremely important science
There is a substantial and steadily-growing body of scientific research showing fluoridation chemicals cause physiological damage. Since the cut-off date for studies included in NHMRC’s latest fluoridation review (2017), more than 400 studies (including more than 180 human studies) have reinforced the damaging effects of fluoride. See A steady stream of science and Water fluoridation is not safe.

4) Despite what you have been told, fluoride does not work!
There is an overwhelming body of evidence showing that fluoridation is not effective in reducing dental caries. How can health officials continue to ignore many large-scale, population-based studies showing there is no discernable difference between fluoridated and non-fluoridated countries, cities and regions? More

5) An obvious lack of ethics
There is a distinct lack of both medical and general ethics involved in water fluoridation. Most of all, mandatory fluoridation denies all individuals a choice in receiving a bioaccumulative toxic healthcare treatment that only works topically, not ingested. Also, the tactics used to defend and promote fluoridation are astounding. More

6) What’s happening elsewhere?
Less than five per cent of the world receives fluoridated water; 98 per cent of Europe have ceased or rejected fluoridation based on toxicity and lack of effectiveness; fluoride is banned in India, China and Japan; and there is a global trend of de-fluoridation. More

7) The source of fluoridation chemicals
Don’t be fooled, fluoridation chemicals are a highly-toxic, hazardous, contaminated industrial waste by-product from the processing of phosphate fertiliser. Every year Australia dumps around eight tonnes of hexafluorosilicic acid and powdered silicofluorides into the environment due to its ineffective and expensive fluoridation program. More

9) The recent TGA Exclusion was preposterous
Fluoride is added to our drinking water to treat our teeth and therefore, by default, is a therapeutic good. Yet the TGA, by creating a specific Exclusion, has evaded regulating this toxic substance. Also, the NHMRC, despite saying fluoridation is “safe and effective” only provides guidelines (with a disclaimer) and like the TGA, plays no role in regulating the process of fluoridation.

10) The real cause of tooth decay (and a major contributor to other disease)
Around 90 per cent of Australia’s population receives fluoridated water and yet Australia has a dental decay crisis. Sugar is the major cause of tooth decay and yet we are wasting many millions of dollars every year on a fluoridation program that clearly does not work and causes long-term damage to our health. Also, rates of heart and cardiovascular disease, diabetes, cancer and obesity are increasing at disturbing rates and all of these diseases – costing the country many billions of dollars – can be directly attributed to sugar consumption. If this issue is addressed directly not only will dental decay rates decline but other health issues will also improve. We applaud the work that is being done in this area but we urge you to do more. More

In summary, despite what we have been told, fluoride is NOT safe, NOT effective and absolutely NOT ethical. Like other toxic substances, fluoride has been inappropriately defended for decades and we believe it’s time the public are more informed and aware about this vitally important health issue.

Premier Berejiklian, please don’t hesitate to contact us if we can assist in any way. Otherwise, we hope you will take some time to become informed with the recent science and other important issues listed above and use our web site as a resource. 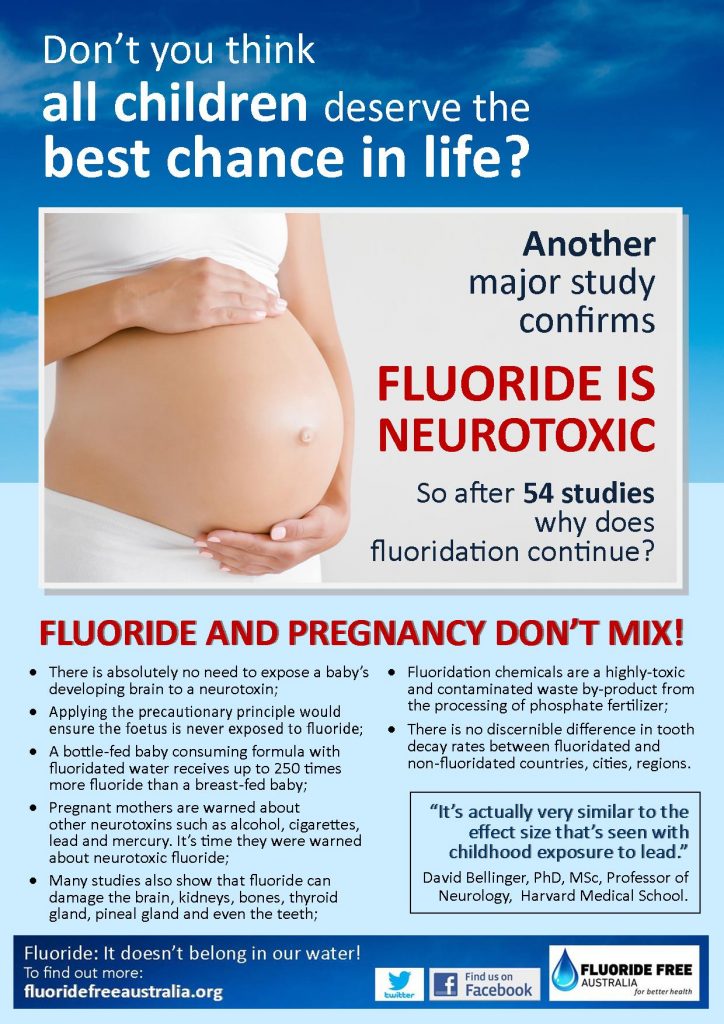