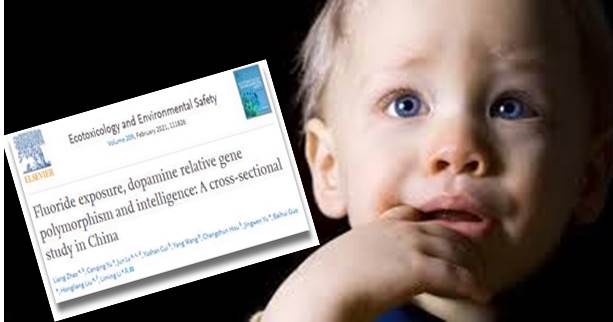 The new Zhao et al study clearly supports Fluoride Action Network’s own recent dose-response assessment of more than a dozen higher quality studies of fluoride and IQ, which found a consistent statistically significant loss of IQ even at exposures of 0.7 mg/L and below.

This new study is also important because it confirms findings from two previous studies which found that people with some specific genetic variations affecting neurodevelopment are especially susceptible to loss of IQ from fluoride exposure.  Those previous papers were by Zhang et al (2015) and Cui et al (2018), and they found 5-fold and 4-fold greater loss of IQ for people with specific variants in two genes.  The new paper extends the findings by looking at four different genes simultaneously, and evaluating the interactions between the genes and between fluoride and IQ.  All four genes are known to affect neurodevelopment, acting through the neurotransmitter and hormone dopamine, according to Zhao et al.  The study found that certain combinations of variants in the four genes produced much greater susceptibility to loss of IQ from fluoride exposure, similar to what had been found in the single gene studies of Zhang and Cui, but revealing a more complicated relationship that depends on interactions between several genes.

The genetic variations are naturally occurring and each variant typically exists in a sizable proportion of the population, so these are not rare genetic conditions associated only with certain rare diseases.  The technical term for these variants are Single Nucleotide Polymorphisms or SNPs.

This is the first time multiple gene effects have been looked at with fluoride neurotoxicity, but the findings are not unexpected because similar multiple-gene interactions have been found to effect loss of IQ from the neurotoxin mercury.  A large cohort study in England found that children with a combination of the most susceptible variants of genes lost a stunning 25 IQ points from higher mercury exposures, whereas the overall average loss of IQ for all children with all combinations of variants was too small to even detect [Grandjean 2013 video by IAOMT, Julvez & Grandjean 2013, Julvez et al 2013].  If a similar genetic dependence of susceptibility to fluoride exists, this may explain why in some fluoride neurotoxicity studies a few individual subjects showed much greater effects than the average.  The Bashash 2018 and the Green 2019 studies considered these extreme cases as possible outliers, but found that even excluding them did not alter the finding that the remaining subjects still showed clear associations between fluoride and adverse neurodevelopmental outcomes.

The implications for public health policy of genetic variation in vulnerability to fluoride are substantial [Julvez & Grandjean 2013].  An exposure level that might produce a relatively small adverse effect on most people could be causing a very great adverse effect on a genetically susceptible subset of the population.  Regulations to prevent harm must be tailored to the most vulnerable, not the average, because there is no practical way to know in advance who is most susceptible and water fluoridation is mass-medication that cannot accommodate individual variations in response.

* The Zhao (2021) paper reports effect sizes as “IQ points per unit of logarithm of urine fluoride concentration”. These units have been converted to express the effect size for a 1 mg/L increase in urine fluoride concentration from 0.5 to 1.5 mg/L which covers the range of exposures found in the majority of the study children. The paper does not specify whether base 10 or base e (natural) logarithms were used and FAN received no response to inquiries to the authors on this question. However, other papers on fluoride and IQ by some of the same authors have used natural logarithms so we have assumed the same for this paper when converting effect sizes to more easily understood units.