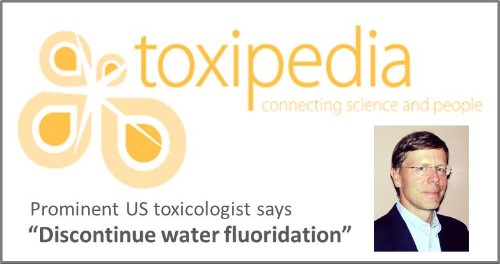 Stephen Gilbert, PhD, a prominent US toxicologist, has reviewed water fluoridation and concluded that it should be stopped immediately, citing adverse health effects.

The report at a glance

Steven G. Gilbert, PhD, has been working to bring awareness about the health effects, history and politics of toxic substances to the public for over 30 years. Dr Gilbert is the founder and Director of the Institute of Neurotoxicology and Neurological Disorders (INND) and is a Diplomat of the American Board of Toxicology. He is also an Affiliate Professor at the University of Washington’s School of Public Health, in the Department of Environmental and Occupational Health Sciences.

On 1 May 2919, Dr Gilbert published his review on water fluoridation titled; “Fluoride Ingestion: Connecting the Dots for Health”. A full PDF copy of the review is available here.

Dr. Gilbert writes, “Risks of ingesting fluoride include lowered IQs and increased ADHD and hypothyroidism rates.” He attributes the substantial decline in tooth decay rates in all developed countries since the 1960s to fluoride toothpaste. This phenomenon, he states, occurred regardless of water fluoridation. “For these and other reasons, a growing number of public health professionals are recommending that fluoridation of drinking water be discontinued.”

“There are two important aspects to the science surrounding fluoridation: 1) is there significant benefit to outweigh any hazard; and 2) from a toxicological perspective, are there significant hazards at expected exposure levels (dose/response) and are some people more vulnerable than others?

“There is no question that ingested fluoride can be detrimental to human health. The challenge is determining if there is a level of exposure to fluoride that is safe and improves dental health.”

He says that fluoridation’s endorsement by the U.S. government and much of the medical establishment is in stark contrast to most of the rest of the world. “Approximately 95% of the world’s population drinks unfluoridated water. Out of 196 nations, only 24 have any artificial fluoridation and of those, only 10 for more than half their population. Over 98% of Europe’s population drinks unfluoridated water, where only five out of 48 nations have any at all. Some nations have fluoridated salt, but it’s always sold as a consumer choice,” he writes.

Numerous scientific studies finding harm from fluoridation started in the 1950s and have continued to accumulate to the present day. Discontinuing the practice is the prudent preventive measure to tak."

Although the CDC included fluoridation as one of its top ten public health achievements of the 20th century, Dr Gilbert states, “It’s revealing that of all ten, it is the only one that has been rejected or not even considered by most nations, cities and health organizations in the world. It’s also important that much of the most authoritative scientific evidence against fluoridation has come out since 1999 and the CDC has not changed its position.”

The review provides several reasons why water fluoridation is ethically unacceptable, including the Precautionary Principle; “whenever there is evidence that a substance is causing health or environmental harm, preventive measures should be taken, even if the evidence isn’t 100% conclusive,” he says.

“Numerous scientific studies finding harm from fluoridation started in the 1950s and have continued to accumulate to the present day. Discontinuing the practice is the prudent preventive measure to take,” concludes Dr Gilbert.